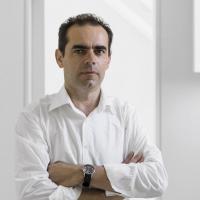 Humberto Conde, Architect, was born in 1968 in Lisbon. Graduated in Architecture by Lusíada University in Lisbon in 1993, between 1989 and 1993 in the academic period, collaborates with several offices. Such as Oficina de Arquitectura with Architect Delfim Canas, Arqui3 with Architects Pedro Frasco and Luís Torres, Atelier da Cidade with Architect Mota Carvalho, and José Tomás . In 1993 begins self employed activity.

Some of these works are published in various magazines and websites, national and international, with some projects having received particular exposure in some publications.

Awards:
In 2006 wins the award for Best Retail Development with the project Housing “Estoril 153”, promoted by the magazine “Revista Imobiliária”.

In 2007 classifies in the 4th place in a Limited Competition for the Elaboration of the Project and Construction of the new Servives Headquarters of City Council of Loures, in partnership with Architect Rolf Reichert.

In 2010 is the third classified in the International Competition for the New Museum of Water in Oeiras – “Museu Água Vida”.

In 2011 is also ranked in 3rd place in the Public Design Competition for the Carnival Arts Centre in Torres Vedras.

In 2013, receives an Honorable Mention at a International level with the Competition “[PACIFIC] Ocean Platform Prison” AC-CA , with the proposal “Outsiders.In”. This competition promoted the debate on the development of spatial and sociological concept of imprisonment, with the particularity of having the premise that the location was in the middle of the Pacific Ocean, 20 to 30 km from an Asian, Australian or American coast.