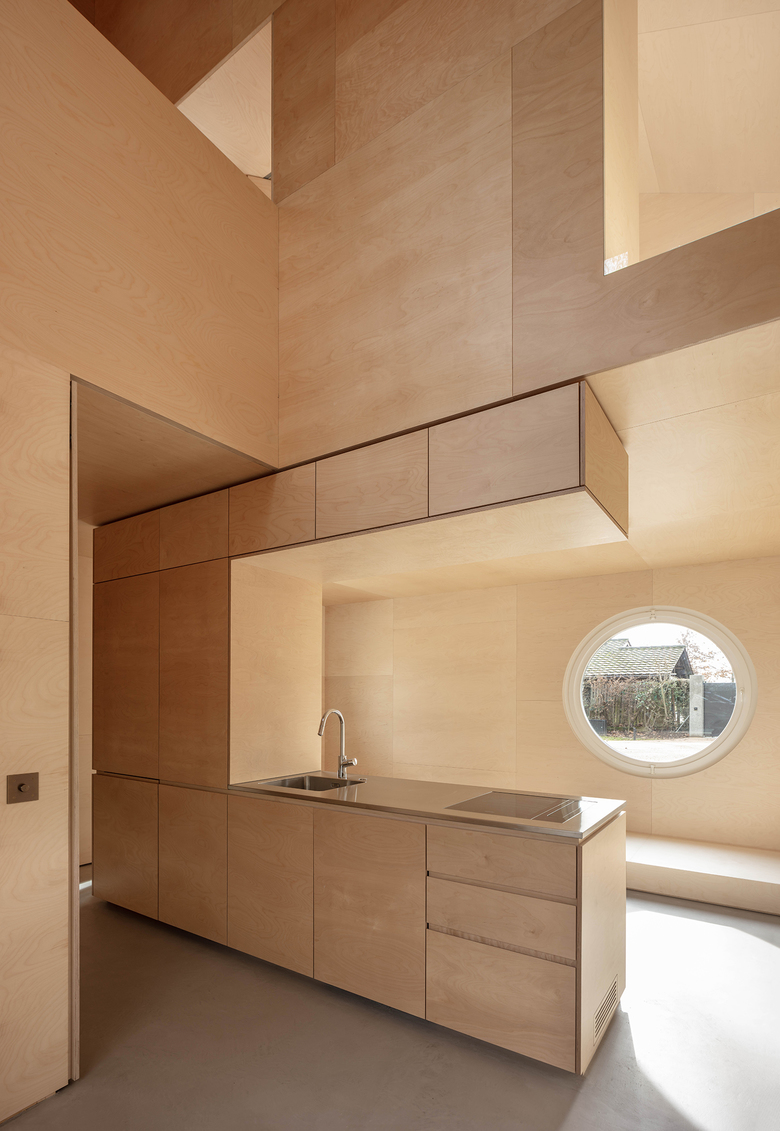 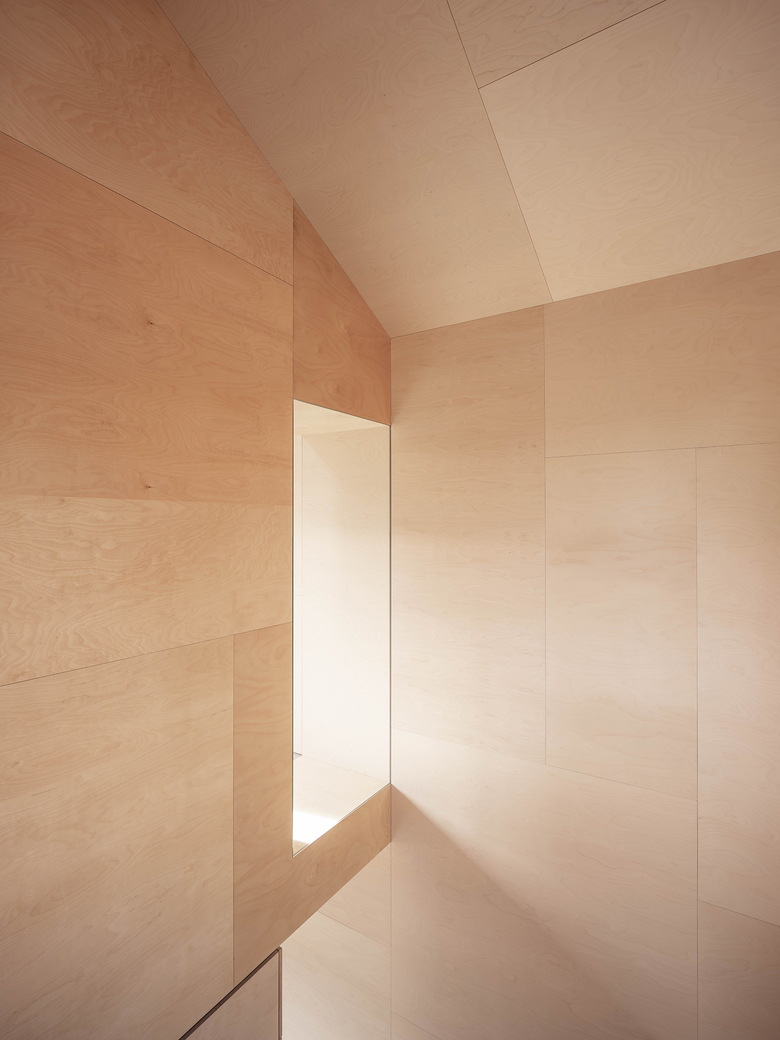 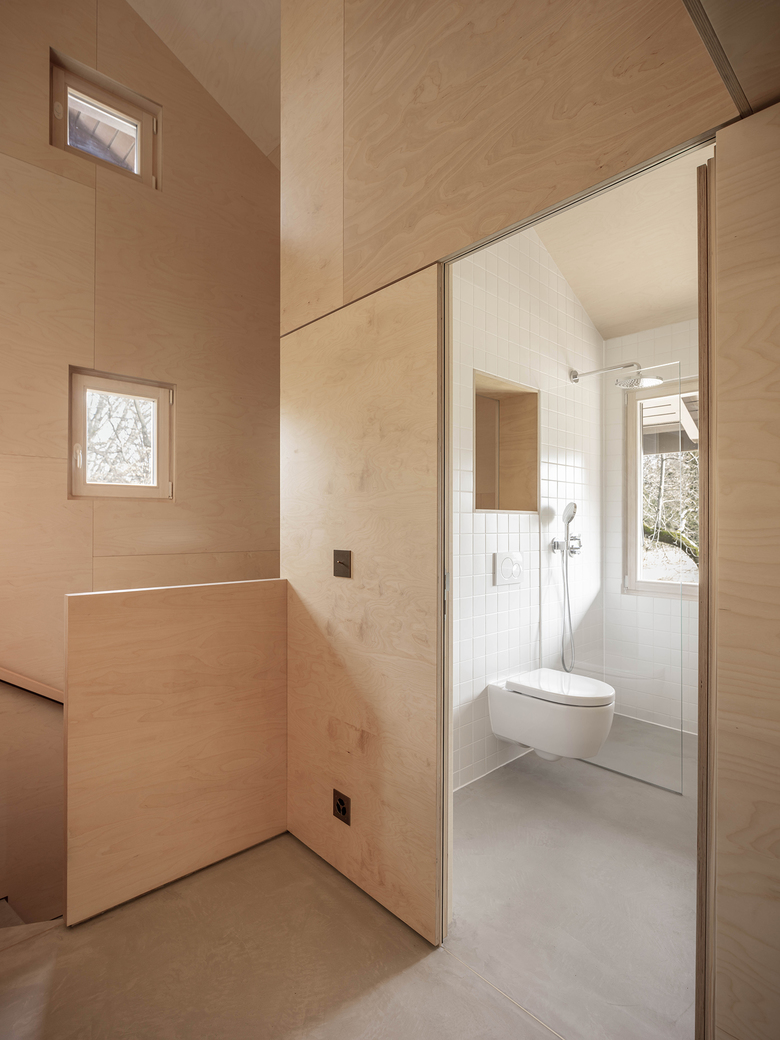 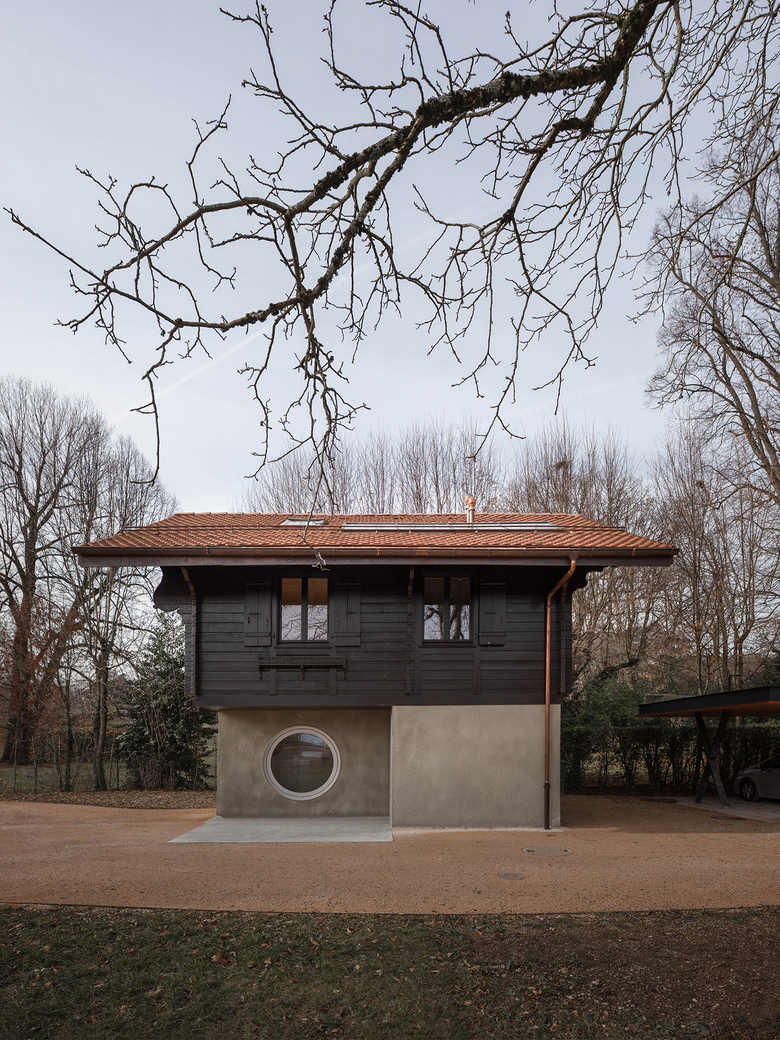 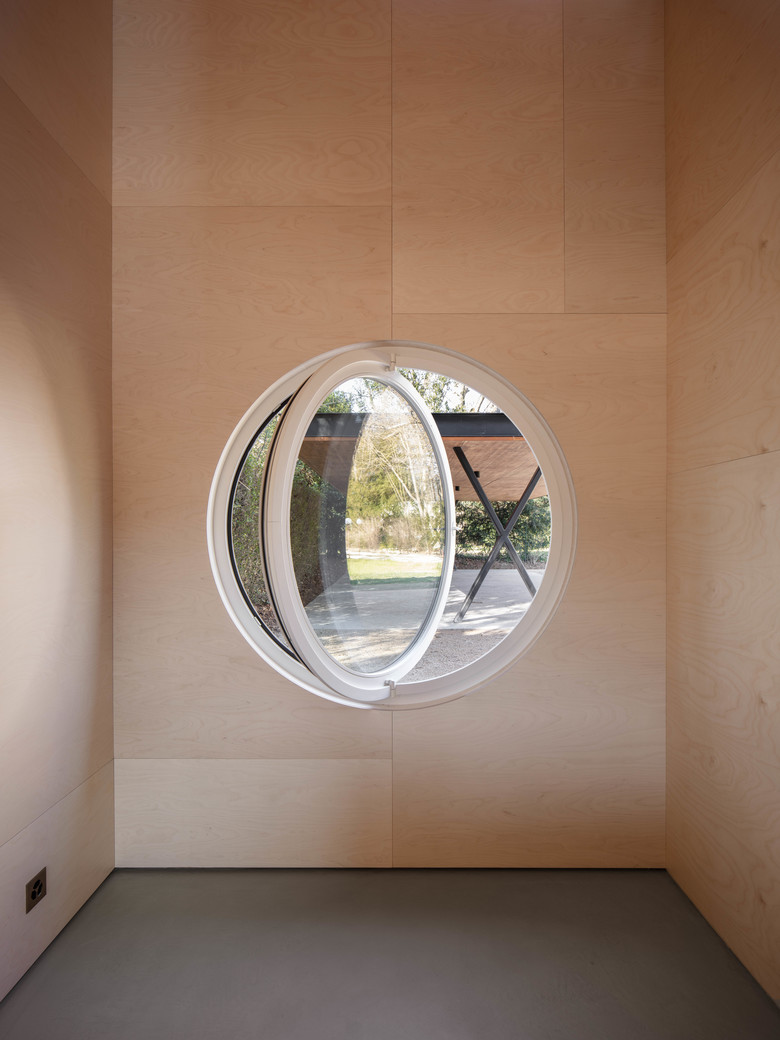 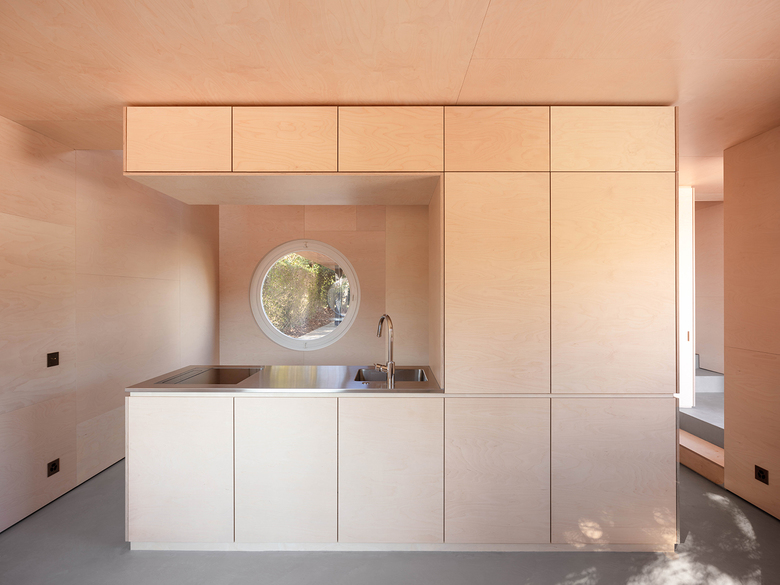 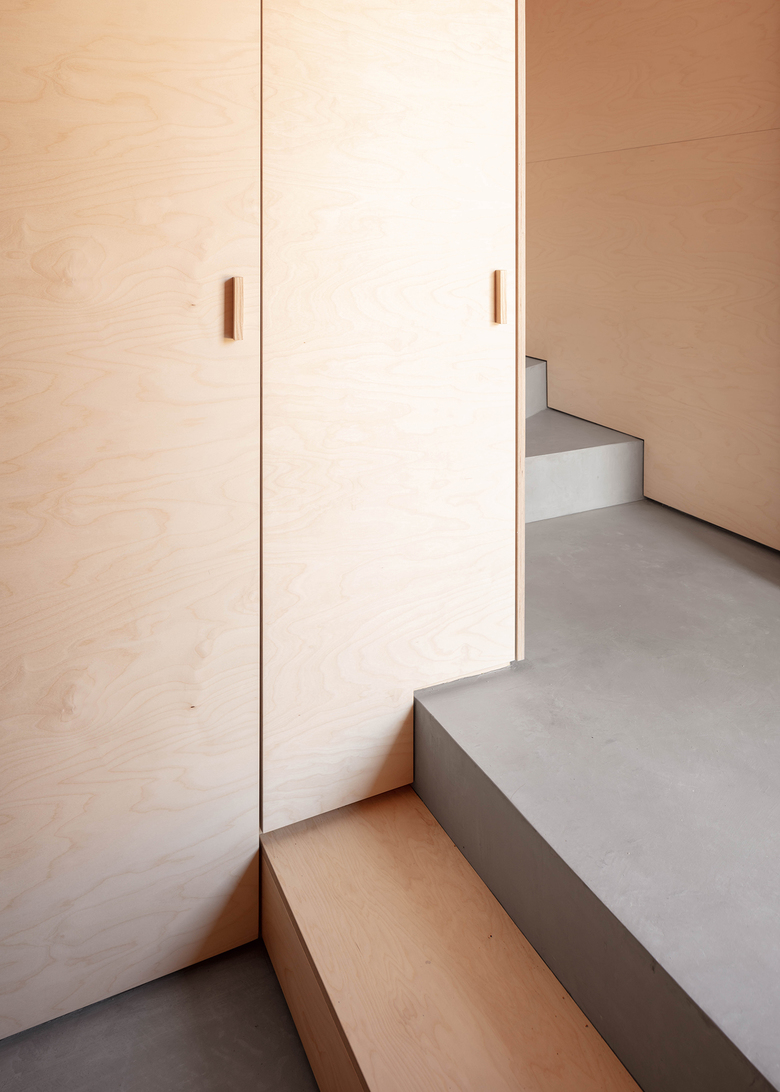 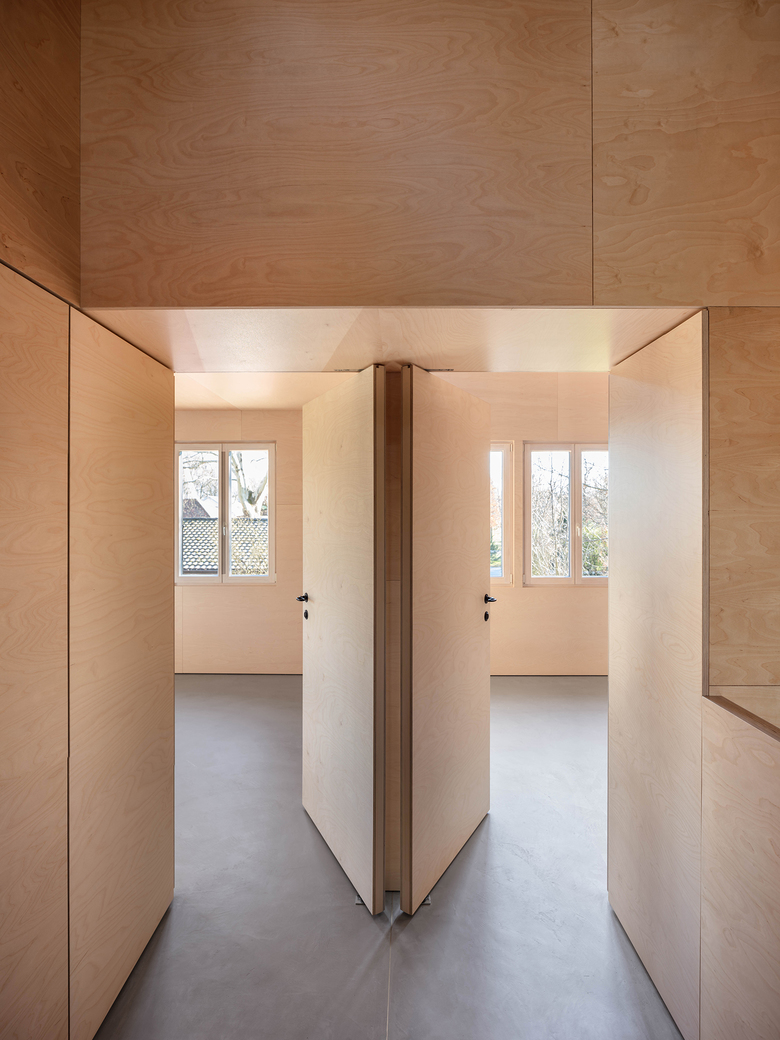 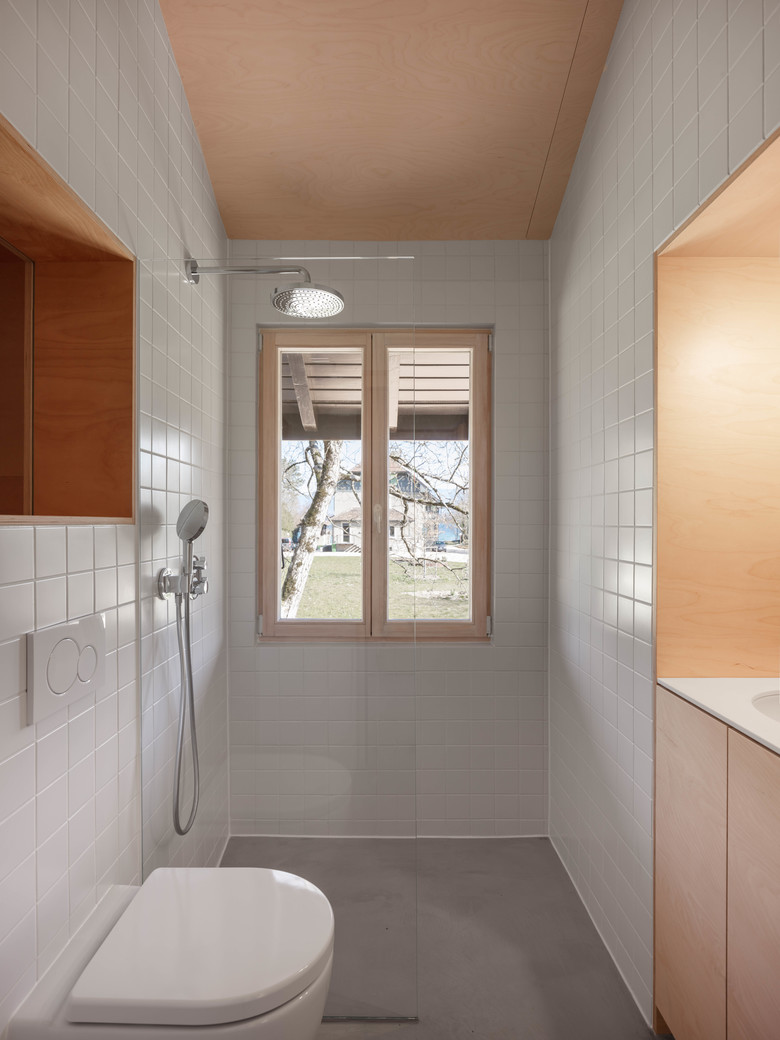 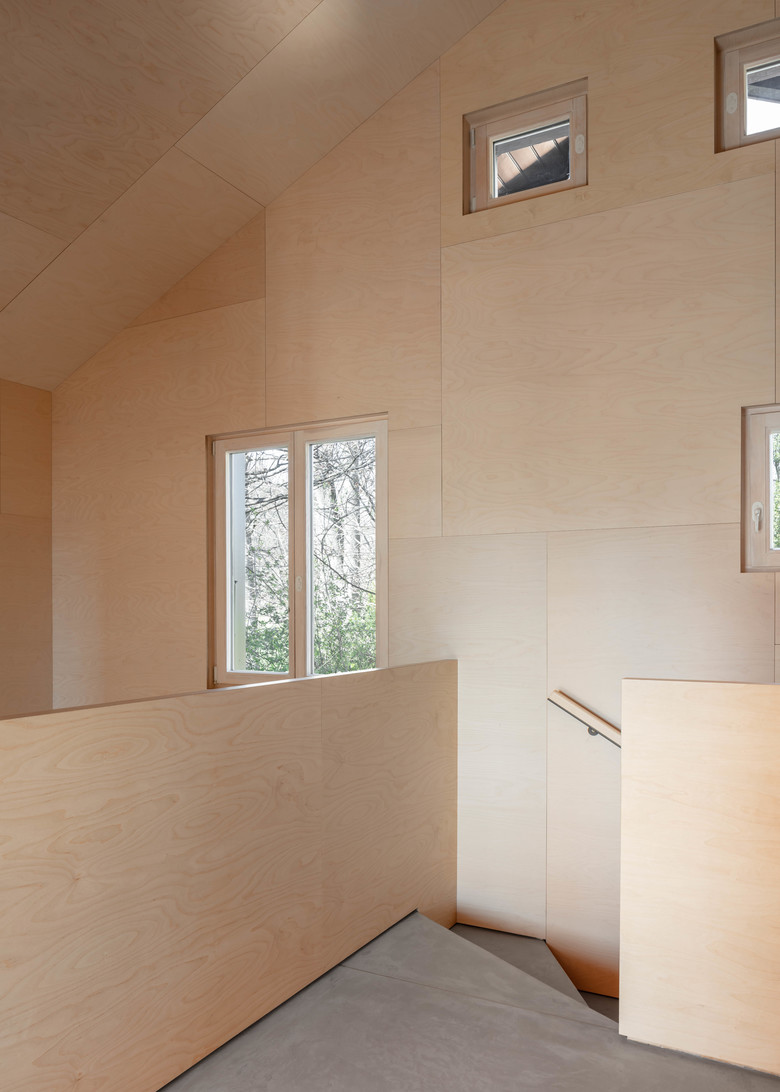 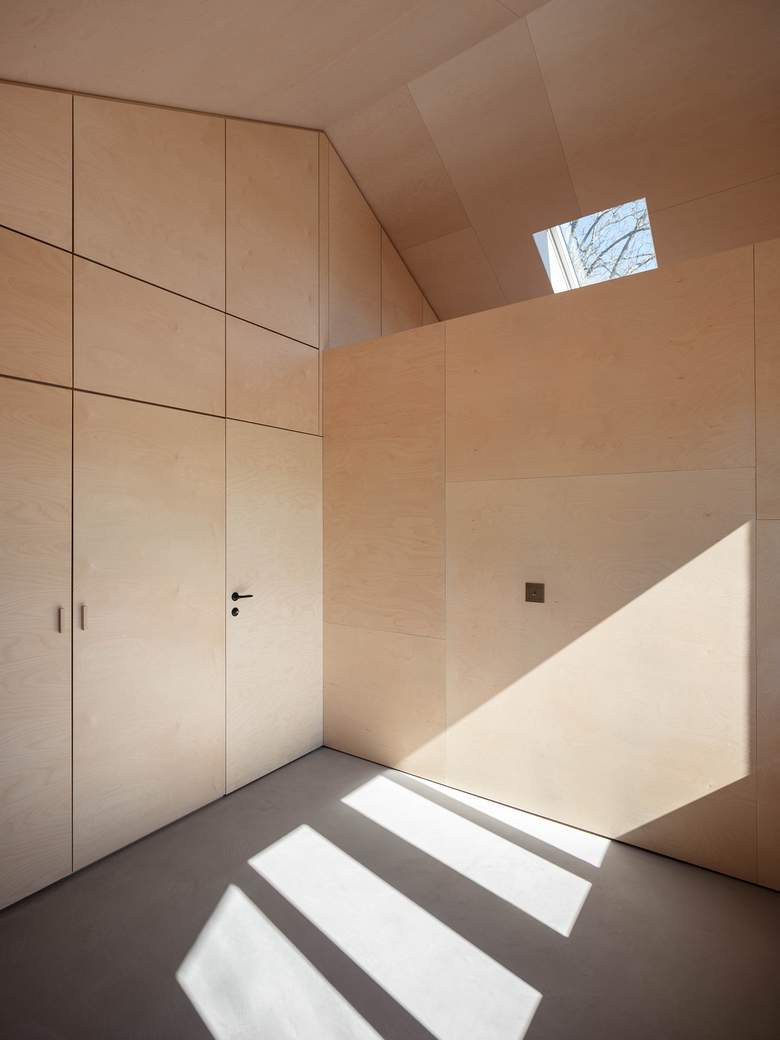 Internal architecture could name the process through which Mr. Barrett’s House has gone through. An interesting idea, directly borrowed from the medical world, would be to call ourselves internists in this sort of surgical intervention.
Everything has been developed from the inside. There is a clear logic to do so when architecture has to face spaces of intimacy, places where the privacy and the interaction and complexity of human relations appear at its least public environment. It is thus about interiority. And the project literally took these criteria as a starting point to develop its conception and construction.
An old garage building that was split into a car space basement and small first floor apartment has been completely emptied and worked out from the inside. The upper wooden chalet was entirely lifted, placed on the side of the actual building and then reinforced, re-structured. Only after this operation it was placed back on the top of the basement.

The two floors are spatially linked through a series of relatively complex sections that create a richness of perception and a feeling of space within the small volume. BUREAU develops a majority of domestic projects concentrated on space making, creating voids where the inhabitants can experience the bodily feeling of projecting one’s perception into space. The goal of this is to create interiority, richness, perceptive experiences that can simply enrich the inhabitation experience.
In the case of Mr. Barrett’s house, a new wooden (birch wood) all-over atmosphere is “injected” into the volume, composed now by two full floors. Spatial connections are favored, enhanced, but in a subtle way in order to produce a multiplicity of points of view.
The house tries to be a dynamic actor for the future inhabitants, to participate to the everyday life of the users.
As the house was not built for a specific user, a fictional character was named to inhabit the project: Mr. Barrett. He is the protagonist of Joseph Losey’s complex movie The Servant. In the scenario (written by Harold Pinter) the house is the play where a series of very complex and intimate relations appear. The interior spaces are constantly utilized as stages for relational dynamics. Mirrors and multiple points of view are shown in the movie; the apartment plays a very active role in the construction of the drama.
In our case, there is no drama but a potential occupation of the small space that serves as a plot for a “real-life movie” to come into the house.

In terms of preservation and renovation, the palimpsestic character of such a building is completely assumed. Its history and nature are made out of successive layers that module its life. This is one of the reasons for the creations of round holes in the façade. They affirm their contemporaneity which will disappear with time and become part of the vernacular nature of the building. It is an ever-changing process that accepts time.

The interior is approached with care and delicacy, especially in the so important details of such an intricate space. Among other features, the ladder inside one of the upper rooms makes a direct reference to Aby Warburg’s study of the Hoppi Indians.