Two artists with a house and guest house hired The LADG to add two buildings with studio space for ceramics, sculpture, painting, and photography. The additions in concrete, wood, and metal are striking, but it's the outdoor space between the buildings that is the heart of the project. The... The LADG 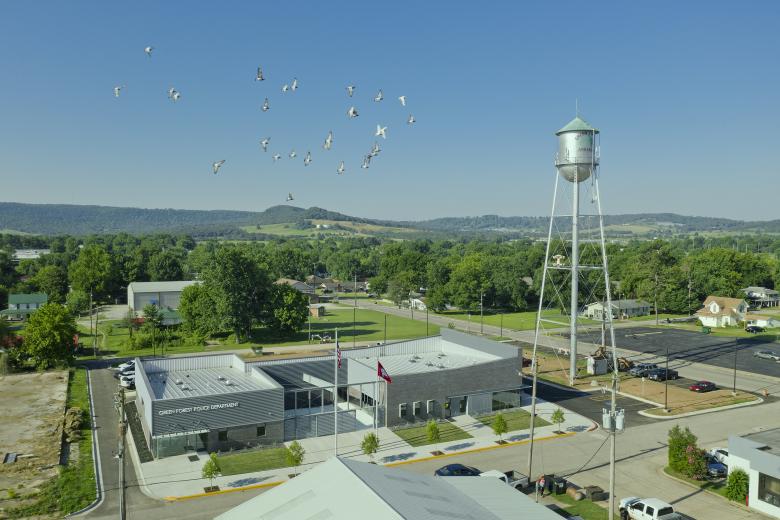 This joint city hall and police station serves the residents of Green Forest, a small town in Northwest Arkansas. The building is easy to find, since it sits directly next to the town's historic water tower that was built in the 1930s. Modus studio answered a few questions about their design... modus studio 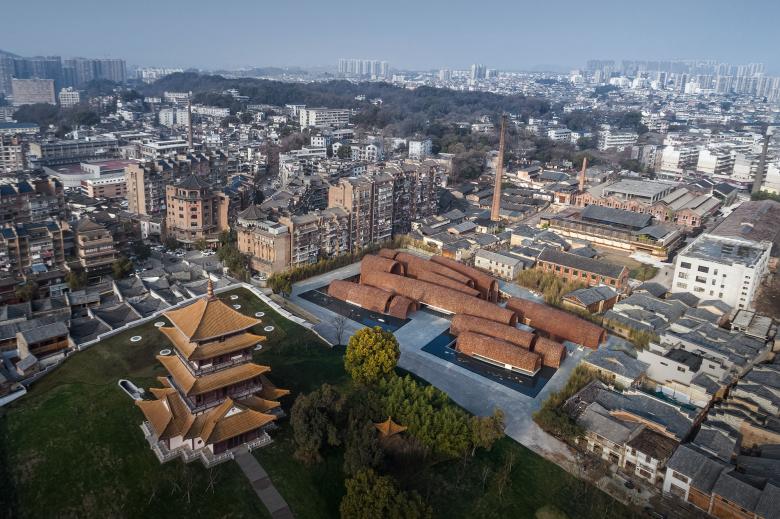 Studio Zhu-Pei designed the new Imperial Kiln Museum that unpretentiously tells the stories from the porcelain-manufacturing town of Jingdezhen in terms of shape and material, and in so doing comments on the future-potentials of the past far beyond this one town. Eduard Kögel 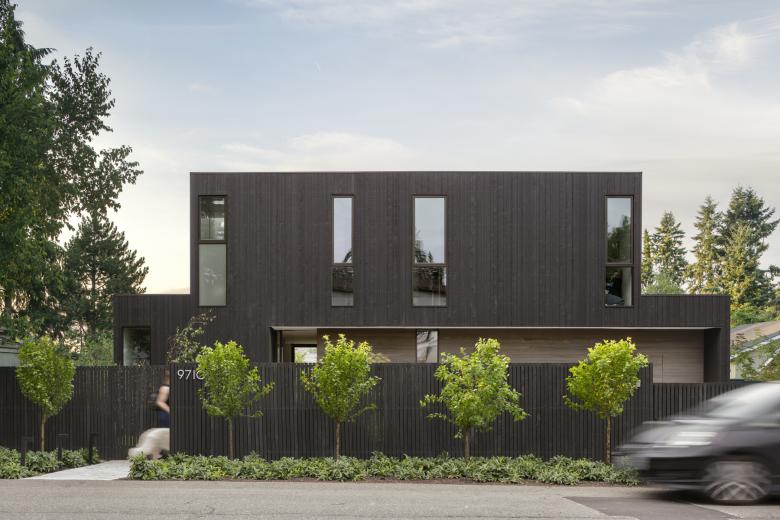 Chinese landscaping and landscape painting inspired the design of the Yu-Jo Courtyard House, which uses outdoor spaces to ensure privacy and to connect the family inside to nature outside. The architects at Wittman Estes answered a few questions about the house located in Clyde Hill,... Wittman Estes 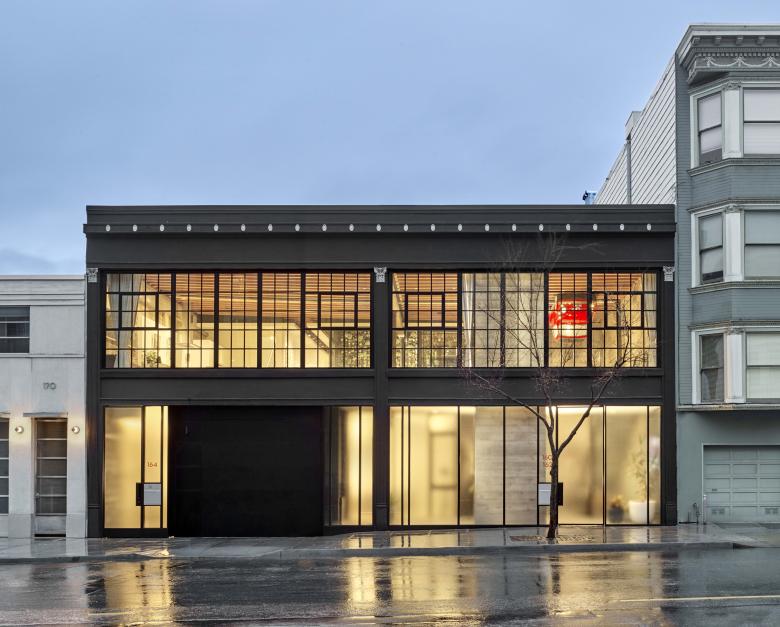 The Hollyhock sits in the midst of an urban landscape that is typical of Phoenix and Scottsdale: streets lined with single-family houses and the occasional gated community. But with its townhouses oriented about a community commons. The Hollyhock is a departure from the norm. Studio Ma... Studio Ma 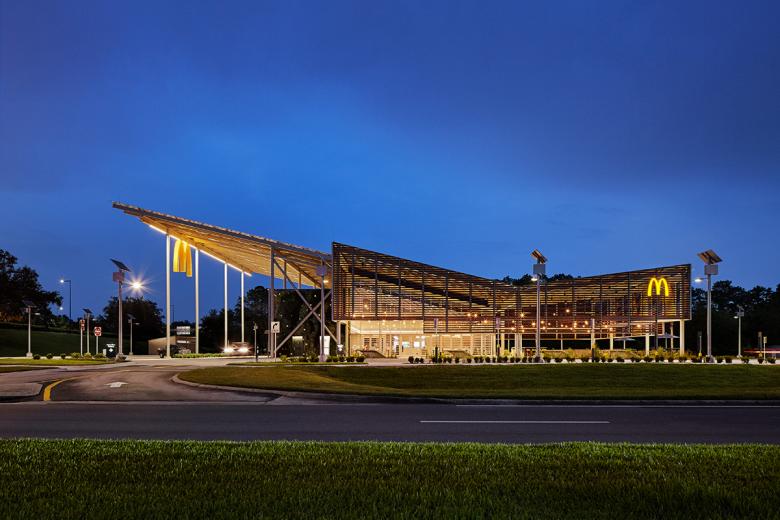 This house on Hillside Avenue in Los Angeles is so large it comes with a 12-car garage on its lowest level. Designed by Cape Town's SAOTA, the house was inspired by a nearby mid-century modern icon that makes it all about the views, not the cars. SAOTA sent us some images and text on the... SAOTA

New Perspectives for the Poor

Fighting rural poverty is one of the major goals of the Beijing government. Investments should increase the attractiveness and the economic prosperity of rural areas so as to generate viable alternative perspectives for local people to leaving their home village. CU Office has been working on... Eduard Kögel

The aptly named Lantern Studio, which houses a scooter workshop and other spaces for a creative couple, glows at night through a wall of slatted wood. Flavin Architects answered a few questions about the backyard retreat in suburban Wellesley, near Boston. Flavin Architects 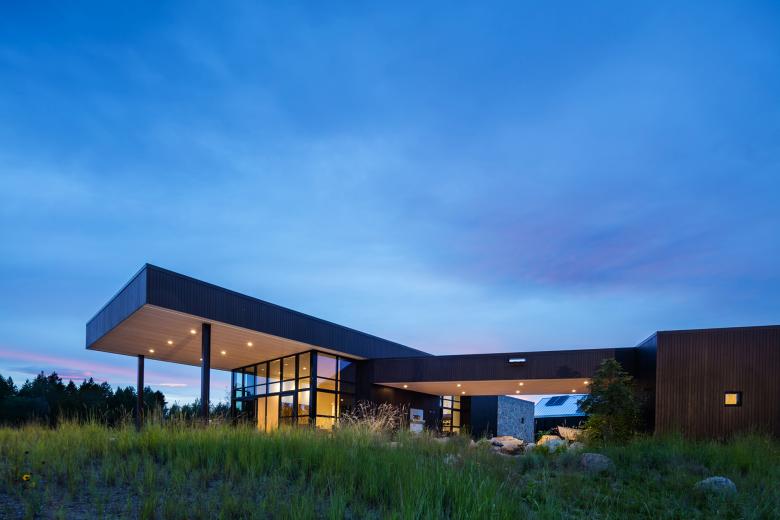 Taking its name from the two rivers that abut the property, the Confluence House is a relaxed composition of three structures that prioritizes outdoor spaces as much as those inside. The architects at Cushing Terrell answered a few questions about the house in northwest Montana. Cushing Terrell 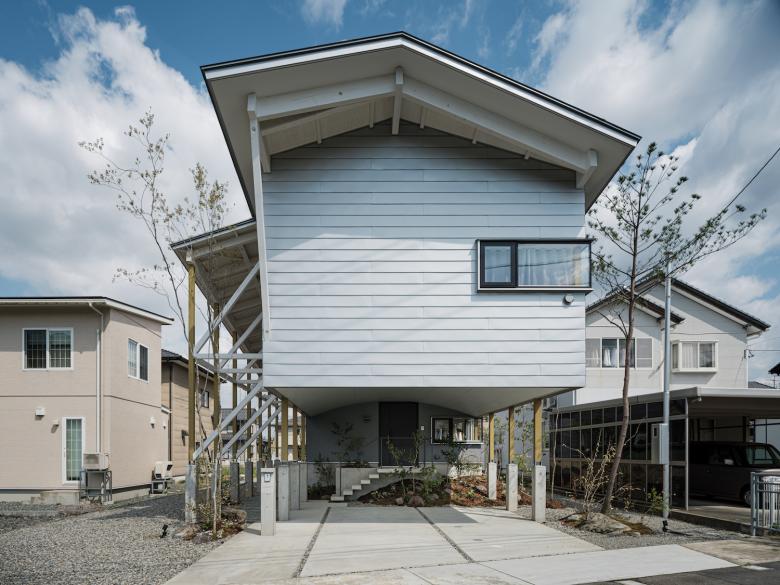 This house, located in a part of a Japan with a lot snowfall, was designed to be resilient outside and amenable to daily life inside. The architects at Eureka answered a few questions about the recently completed Silver Water Cabin. Eureka 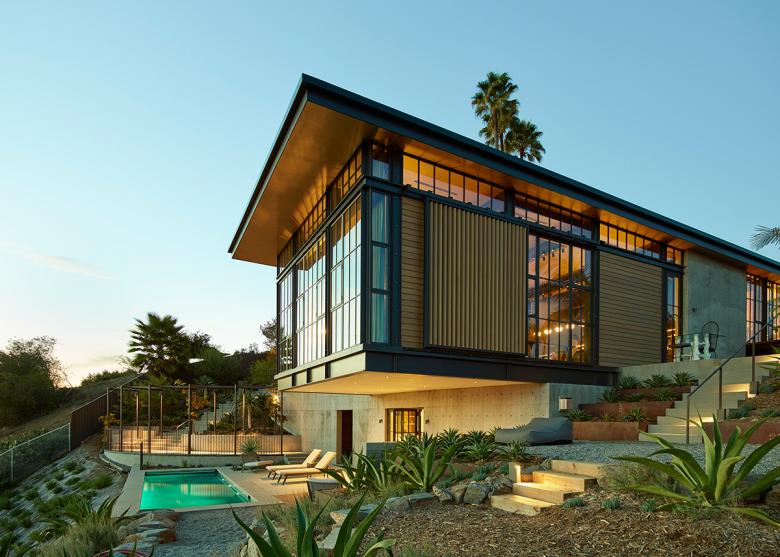 A great room sits at the heart of this house on a steep slope in the Hollywood Hills. Even though it has views of Los Angeles, the space feels like a Manhattan industrial loft, with large windows and steel framing. That was intentional, as explained by Kristen Becker, who started the house's... Mutuus Studio 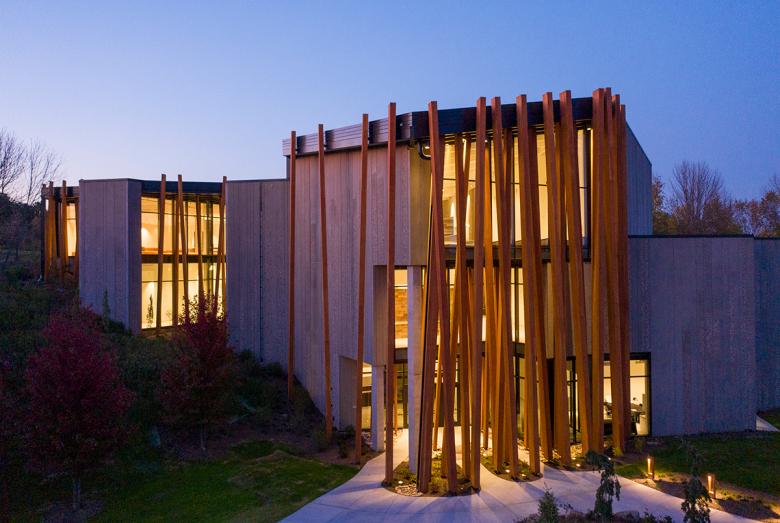 Originally scheduled to open next month, the Art Preserve will open in June 2021, delayed by the coronavirus pandemic. The museum is using the time to finalize interior construction and installation of the artworks, all of them artist-built environments. Denver's Tres Birds answered a few... Tres Birds 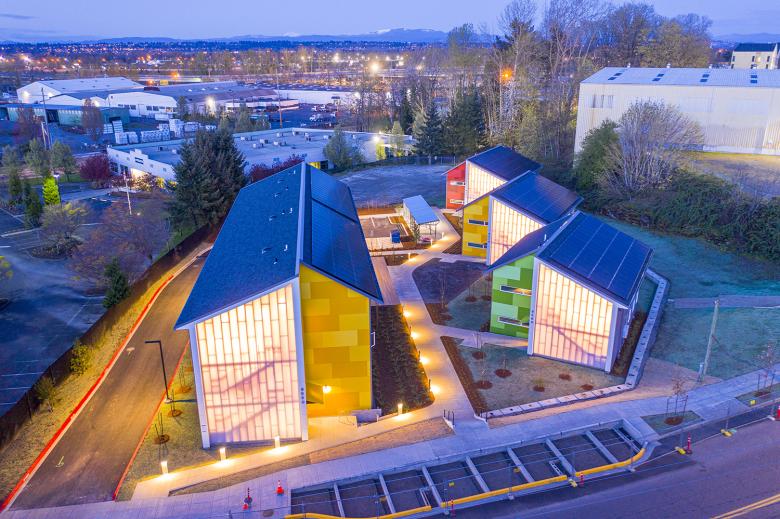 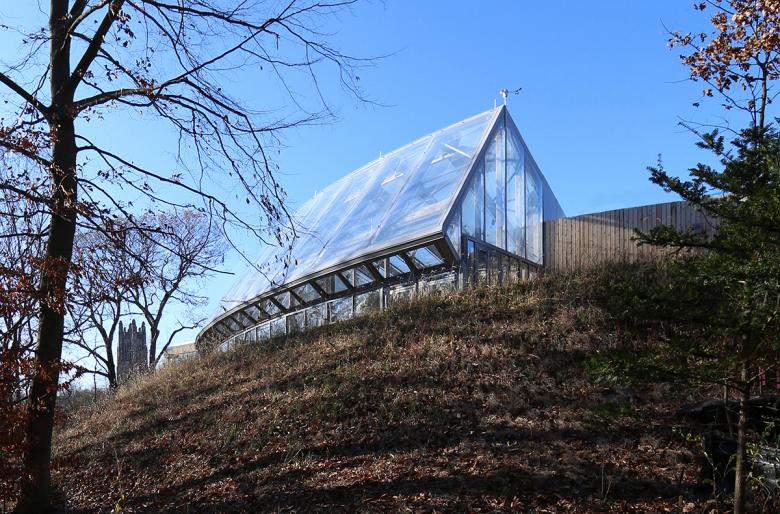 Metal panels with prismatic paint cover the long sides of the new building for Esperanza Health Centers in Chicago's Brighton Park neighborhood. The finish means the color changes with the sunlight, turning it into a dynamic building. Juan Moreno answered a few questions about the project. JGMA 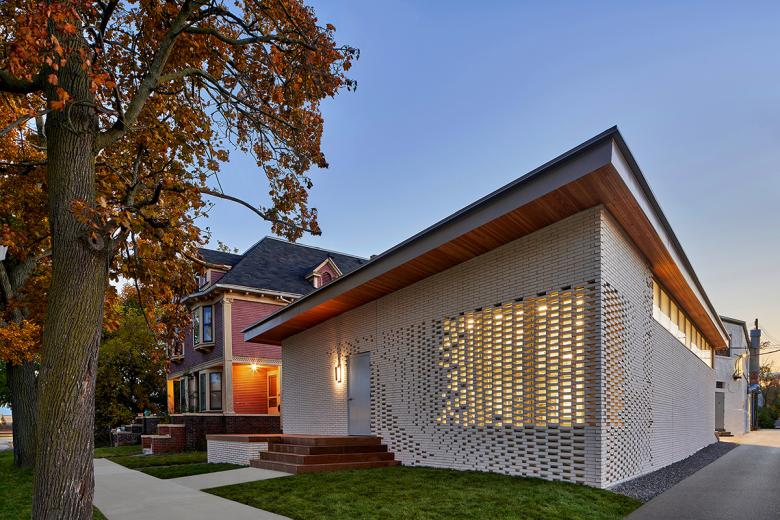 Although Detroit is known for the manufacturing of automobiles, the city also has a strong tradition of crafts. Pewabic Pottery, established 1903, is an important part of the latter, its glazed tiles adorning many buildings in and beyond Detroit. INFORM studio answered a few questions about... INFORM studio 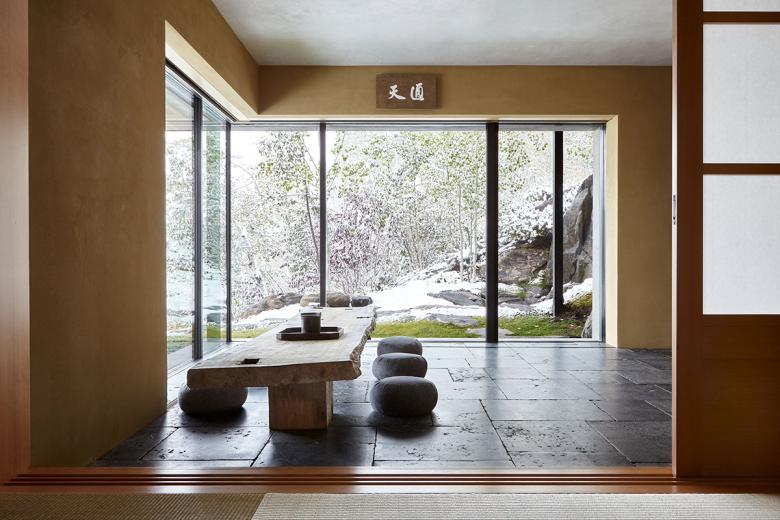 In addition to serving as a residence, the aptly named Art Barn in Aspen, Colorado, contains gallery spaces inside a gabled, wood-sided structure reminiscent of an old barn. The architects at Rowland+Broughton answered a few questions about the building. Rowland+Broughton Architecture / Urban Design / Interior Design 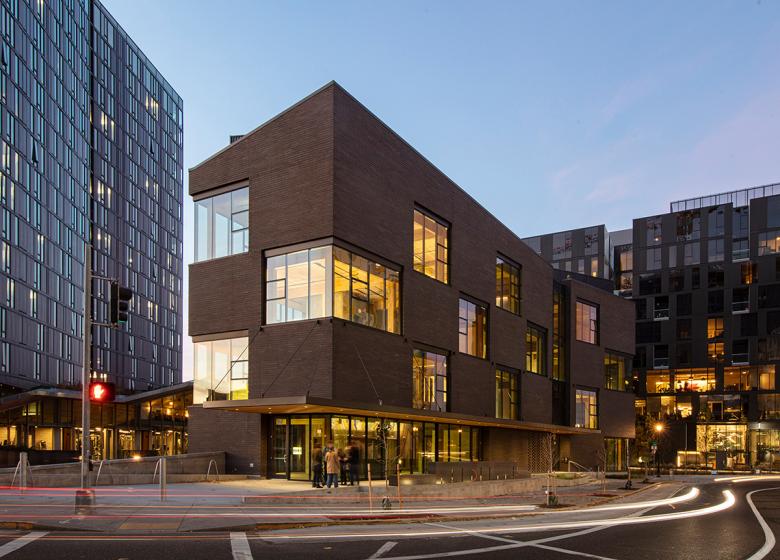 Sideyard fits a narrow space in Portland's Eastside, near the Burnside Bridge and across the street from the Fair-Haired Dumbell. Skylab's design for the five-story office building... Skylab 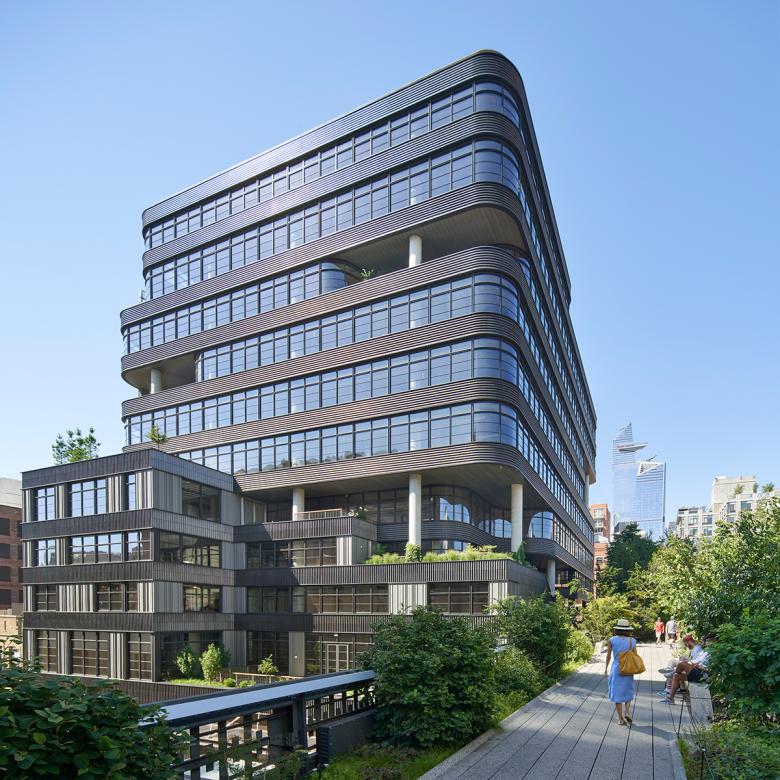 The world-famous High Line park has spawned much development on Manhattan's West Side since it opened in 2009. Many of the new buildings abutting the elevated park incorporate terraces and roof gardens, but none more creatively or abundantly than 512 West 22nd Street, a new office building... COOKFOX 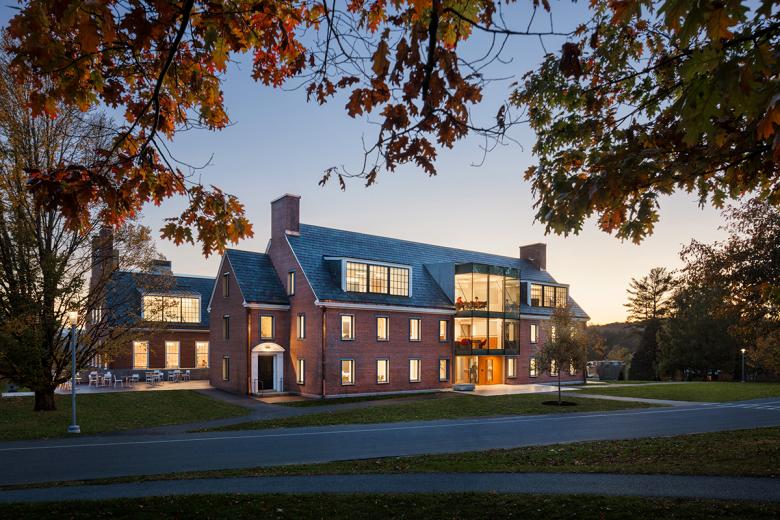 With some of its sixty buildings designed by Pietro Belluschi, Edward Larrabee Barnes, Tod Wlliams Billie Tsien Architects, and others, Bennington College has a strong tradition of modern architecture. The latest campus project renovates one of the college's oldest buildings, giving it... Christoff:Finio Architecture 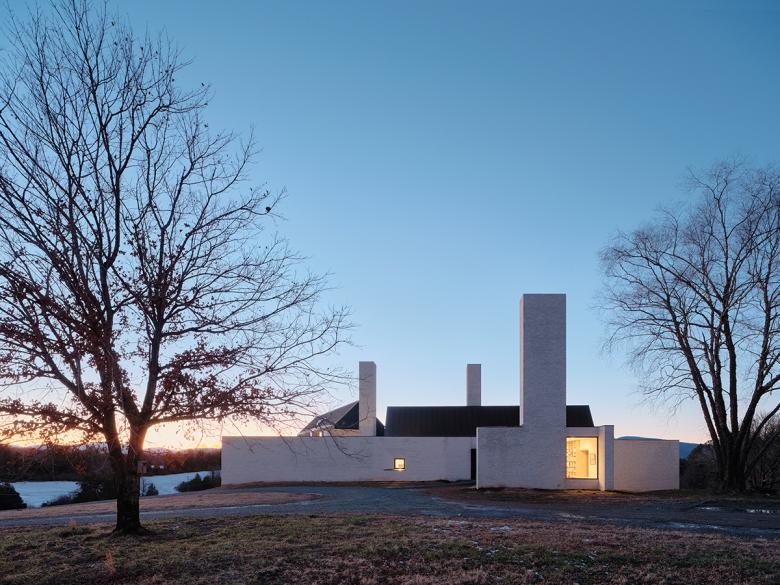 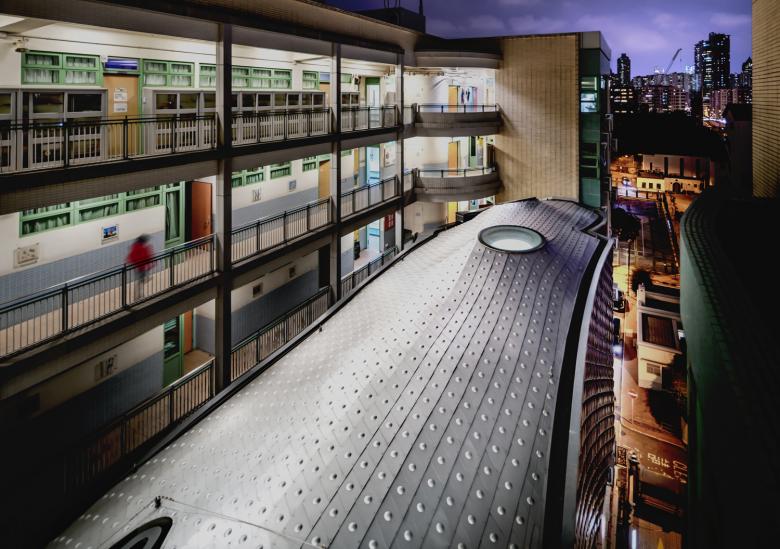 Hong Kong is considered a city of extreme density due to the large number of high-rise buildings. This brings advantages; for public transport provision, for example. A limited buildable area causes high site values, that in turn necessitate this high building density. Some negatives of this... Eduard Kögel Leslie Lok and Sasa Zivkovic of HANNAH worked with various students, researchers, and departments from Cornell University to realize the Ashen Cabin, a prototype and research project that "upcycles" ash trees decimated by beetles. Lok and Zivkovic, who recently won a HANNAH 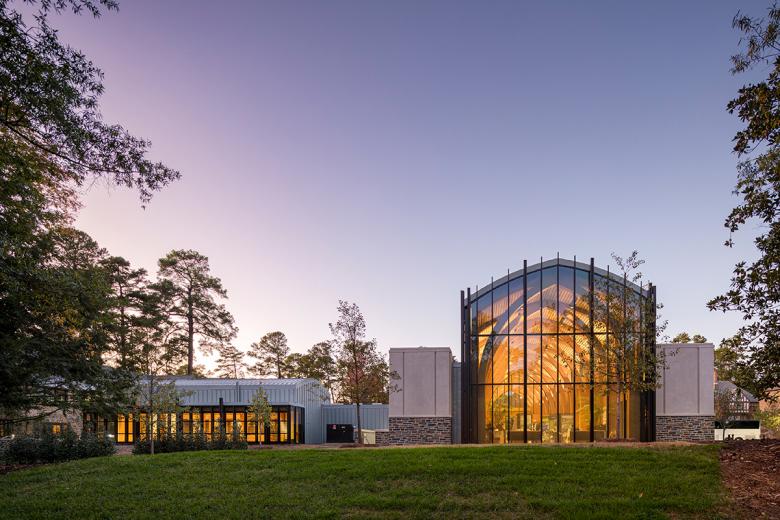 Duke University's new Karsh Alumni and Visitors Center sits at the entrance to the school and consists of four buildings: an event building, a meeting pavilion, an office building, and the historic Forlines House. The assemblage surrounds a lawn that serves as an outdoor even space.... Centerbrook Architects & Planners 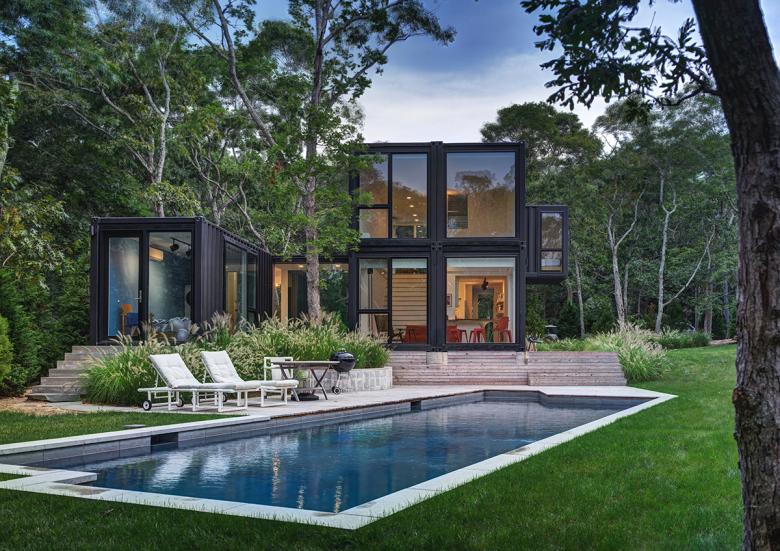 A decade ago MB Architecture created an art studio out of two shipping containers in the Hamptons. The firm recently completed a single-family home nearby, also made from containers, with four of... MB Architecture

This house takes its name from Figure Eight Island, a barrier island in North Carolina that is home to a large number of regionally inflected modern homes. Point Office responded to the island's architectural context and the dictates of coastal regulations. The architects answered a few... Point Office 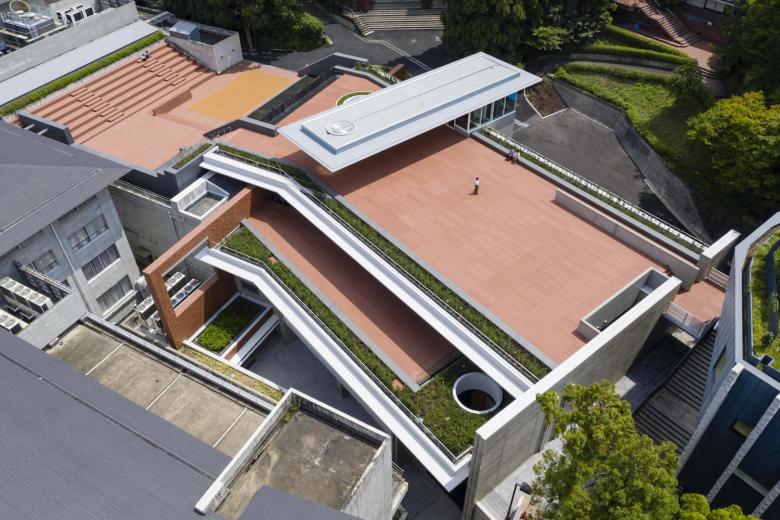 The Kyoto University of Art & Design's new Botenkan, as it's called, serves primarily as the home for the school's administrative functions, but a plaza atop the building turns it into a social hub for students. Architect Waro Kishi, a professor at KUAD, answered some questions about the... Waro Kishi + K.Associates 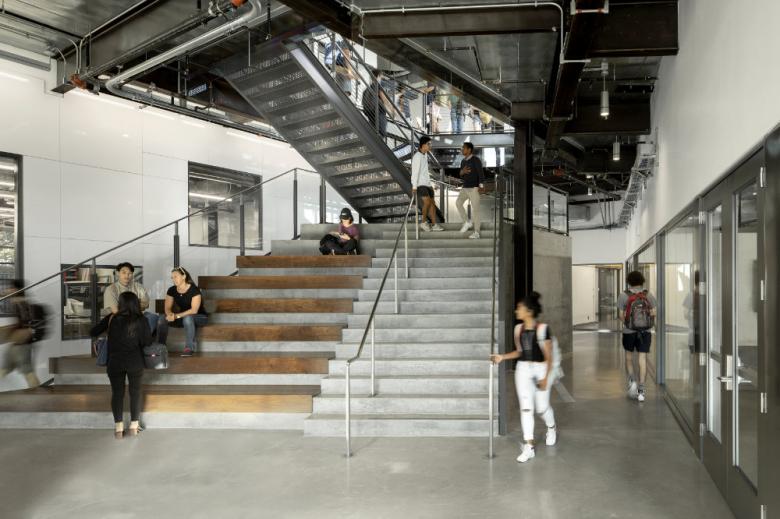 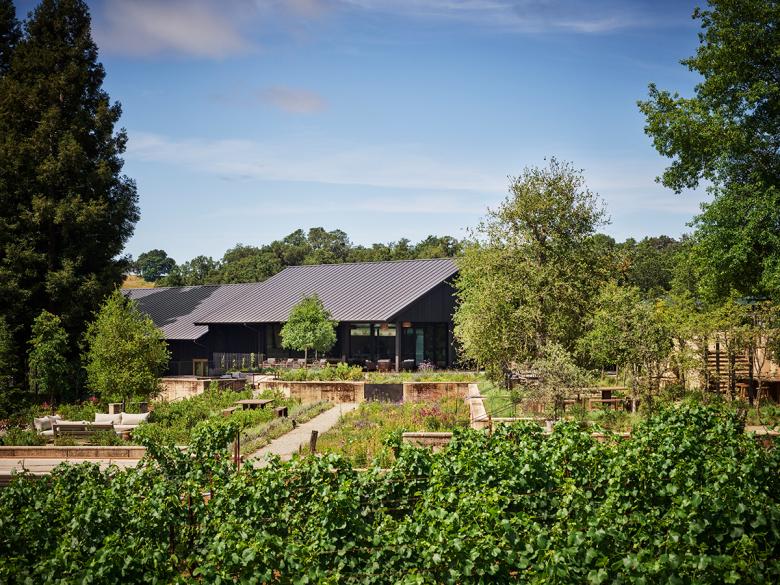 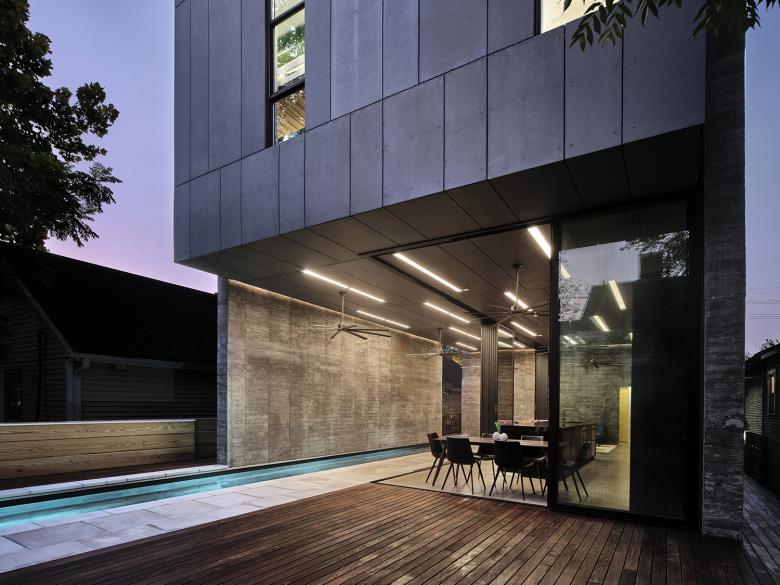 This two-unit house designed by an architect for his family features a generous indoor/outdoor living space removed from the street. Contemporary in materials and architectural expression, the house nevertheless looks to historic houses in New Orleans for inspiration. Architect Nathan Fell... Nathan Fell Architecture

LR2 Residence sits on a hillside in Pasadena, California, a city northeast of Los Angeles. Montalba Architects exploited the location by lifting the living spaces to the top of three floors to take advantage of panoramic views. The architects answered a few questions about the house. Montalba Architects 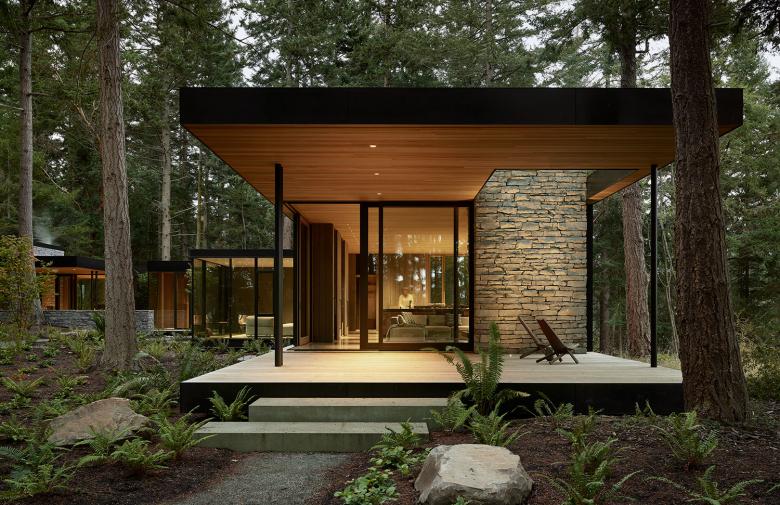 Whidbey Island, located in the Puget Sound north of Seattle, is a scenic island dotted by small farms. One such farm is the setting for a single-family residence designed by mwworks, whose design maintains as many trees on the site as possible. The architects answered a few questions about the... mwworks 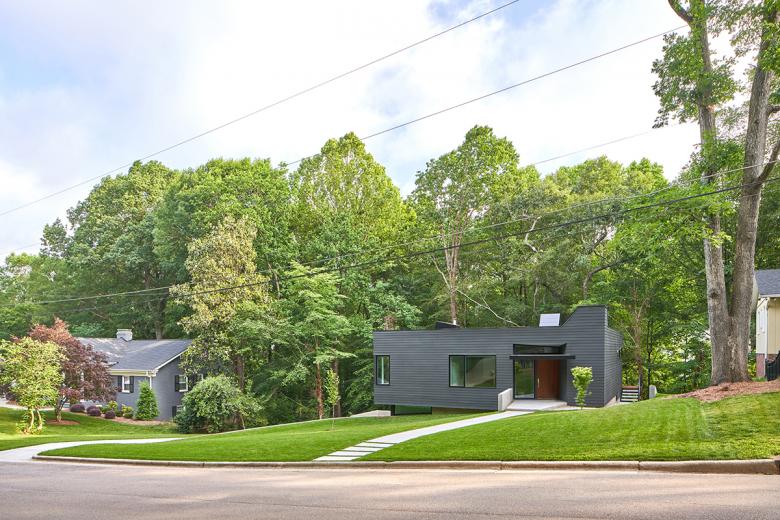 Sited on the edge of a ravine in Raleigh, North Carolina, this single-family house has its own ravine of sorts: a curvaceous entry and stair that cuts through the middle of the plan. In situ studio answered a few questions about the Yamato Philbeck Residence. in situ studio 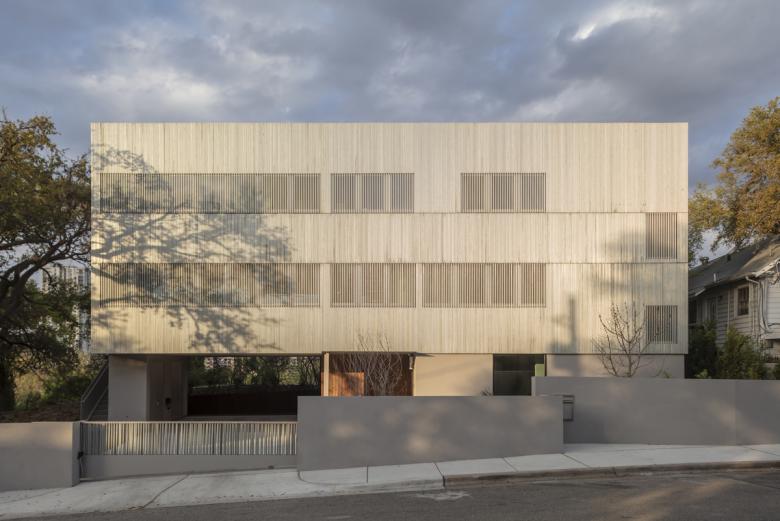