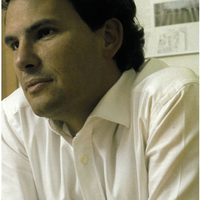 He has graduated in Architecture from the Faculdade de Arquitectura da Universidade Técnica de Lisboa (FAUTL) in 1989.

President of the Aveiro Section of the Ordem dos Arquitectos (NAAV) since 2007.

He was design visiting professor at the Aveiro University in 1997/1998. He teaches architecture at the Lusiada University of Oporto since 1994.

PhD in Architecture from the University Lusíada of Oporto

Made a solo exhibition at the Chamber of Architects in Lisbon, in the loop "Project Room" - and appears in numerous exhibitions of architecture and design both in Portugal and in Europe.

His work has been published in several magazines, and has received nominations and awards both in design and architecture.